On October 19, 2021, the Madera Irrigation District (MID or District) Board of Directors honored the memory of Director Rick Cosyns.

The MID Board of Directors passed a Resolution in memory of Director Cosyns and presented the Resolution to his wife, Lynne Cosyns, and son, William Cosyns.  The Resolution read, Director Cosyns was a member of the Madera Irrigation District Board of Directors from his election to office in 2007 until his untimely passing in 2021, MID was greatly saddened to learn of the passing of Rick Cosyns, an exemplary public servant and person.  It is recognized that during his tenure in office Rick was a loyal and devoted Director, giving of his time and energy to benefit the Madera Irrigation District growers, employees, and citizens of Madera.  Rick’s outgoing personality, kindness, and spirit of true dedication to public service made him a beloved and respected figure throughout Madera.

“Rick will be greatly missed by this Board and this community” stated Jim Erickson, MID Board President, “Rick truly cared about Madera and the people who lived here and it was shown daily in his life by his commitment to the public and the organizations he represented.”

Also at the October 19, 2021 Board Meeting, the MID Board of Directors appointed Tim DaSilva to fill the Division 2 vacancy.  “Tim’s involvement and knowledge of California water make him a great fit for this appointment.  Tim has spent much of his own, personal time over many years attending meetings and becoming educated on the water issues that surround us” stated Dave Loquaci, MID Director. 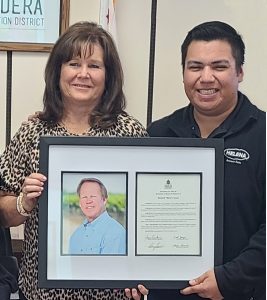 Director Cosyns’ wife, Lynne, and son, William, hold the Resolution presented by the MID Board on October 19, 2021.